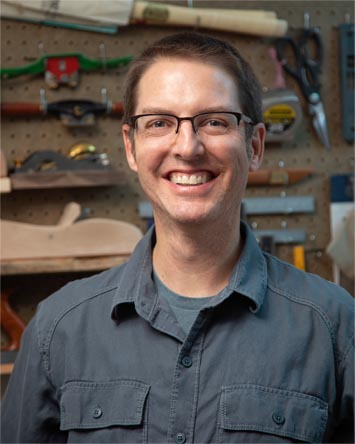 Michael Morris has always created. As a child growing up in Michigan, he built things from Legos, Lincoln Logs, and Tinker Toys. In school band, he played trumpet, then took up guitar and accordion, writing songs along the way. He enjoyed drawing houses at an early age and eventually went on to earn Bachelor’s degrees in both Architecture and Architectural Illustration at Lawrence Technological University in Southfield, MI, landing professionally as an architectural illustrator for over 15 years.

Michael earned his AAS in Fine Woodworking from Red Rocks Community College in Lakewood, CO in 2016. As a woodworker, he began with designing furniture but was drawn to the more abstract world of art. While always creative and a creator, his "Layers" series is his first step into the world of fine art. He creates because it is in his nature to create; "art" is simply the latest manifestation of this.